Dan 9:27. Then he shall confirm a covenant with many for one week; but in the middle of the week, he shall bring an end to sacrifice and offering.

The pronoun “he” refers to the Messiah the Prince. He shall confirm a covenant.

Which covenant in the book of Daniel?

Dan 9:4. And I prayed to the Lord my God, and made confession, and said, “O Lord, great and awesome God, who keeps his covenant and mercy with those who love him, and those who keep his commandments.

Dan 11:30. For ships from Cyprus shall come against him; therefore, he shall be grieved, and return in rage against the covenant, and do damage. So he shall return and show regard for those who forsake the holy covenant.

Dan 11:32. Those who do wickedly against the covenant he shall corrupt with flattery; but the people who know their God shall be strong and carry out great exploits.

For a greater detail of the word covenant, look at the text in Dan 11:26-29 on my website www.ayindk.com which is entitled Sexual Immorality in the Roman Catholic Church. In a nutshell the word covenant means the plan of salvation both for the Jews and the Gentiles.

Dan 9:27. He shall confirm the covenant for one week.

One week is seven days. When transferring this over to time prophecy it means seven prophetical years. Where do the seven years fit in our prophetical time chart mentioned in Dan 9:24.25?

Secondly there are seven weeks and sixty weeks which starts in 457 B.C. and finishes in A.D. 27. 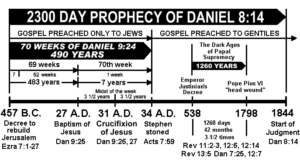 Dan 9:27. But in the middle of the week; he shall bring an end to sacrifice and offering.

When did Christ die and bring an end to the temple sacrifices and offerings in Jerusalem? He was crucified in A.D. 31.

Matthew 27:50.51. And Jesus cried out again with a loud voice and yielded up his spirit. Then, behold, the veil of the temple was torn in two from top to bottom.

When the veil in the temple was torn in two from the top meant that it was not torn by the hands of men but by God. God was rejecting the sacrifices and offerings in the temple because the Jewish priests had crucified his Son Jesus Christ.

Where was the temple transferred too? 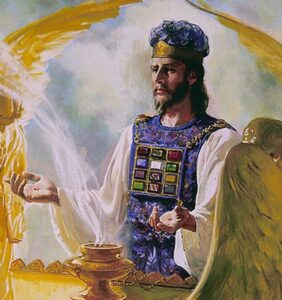 Hebrews 8:1.2. Now this is the main point of the things we are saying: We have such a High Priest, who is seated on the right hand of the Majesty in the heavens, a minister of the sanctuary and of the true tabernacle which the Lord erected, and not man.

Hebrews 9:12. Not with blood of goats and calves, but with his own blood he entered the Most Holy Place (Greek: Sanctuary) once for all, having obtained eternal redemption.

Hebrews 9:25.26. Not that He (Christ) should offer himself often, as the high priest enters the Most Holy Place (Greek: Holies) every year with blood of another. He then would have had to suffer often since the foundation of the world; but now, once at the end of ages, he has appeared to put away sin by the sacrifice of himself.

Hebrews 4:14. Seeing then we have a great High Priest who has passed through the heavens, Jesus the Son of God, let us hold fast our confession.

The earthly sanctuary in Jerusalem ceased to function at the cross in Gods eyes and was therefore transferred to heaven where Christ is administering as our High Priest today.

Dan 9:27. And on the wing of abominations shall come one who makes desolate, until the decreed end is poured out on the desolator.

The word wing comes from the wings of birds and denotes swiftness.

The word abominations are mentioned a few times in the book of Daniel.

Dan 11:31. Forces from him shall appear and prophane the temple and fortress, and they shall take away the regular burnt offering. And they shall set up the abomination that makes desolate.

Matthew 24:15.16. Therefore, when you see `the abomination of desolation,´ spoken of by the Daniel the prophet, standing in the Holy Place, then let those who are in Judea flee to the mountains.

The abomination of desolation refers primarily to the destruction of Jerusalem in A.D. 70 by Titus the Roman military commander and his army of 80,000 soldiers.

Dan 9:27. The one who makes desolate refers to the military commander Titus. When he became Emperor in A.D. 79, he died two years later of fever, thus the end was poured out on the desolator.

There two applications to the words “abomination of desolation” in the book of Daniel. The second application is found in Dan 11:31. Forces from him shall appear and prophane the temple and fortress, and they shall take away the regular burnt offering. And they shall set up the abomination that makes desolate.

Dan 12:11. And from the time that the regular burnt offering is taken away and the abomination that makes desolate is set up, there shall be 1,290 days.

These two texts refer to the time when the Papacy in the Roman Catholic Church set up the “abomination of desolation” during the Dark Middle Ages. The papacy took away the sanctuary teachings from the people during the Middle ages. Especially from A.D. 508 to 1798 which is exactly 1,290 years in prophetic history. The papacy substituted the sanctuary teachings for their own abomination that leads to desolation teachings: forgiveness of sins through the pope and priest and not through the Lamb Jesus Christ. For a more detailed explanation of these texts see my website www.ayindk.com Dan 11:31.45.

Daniel 9:26. The destruction of Jerusalem was forecasted many years in advance