Daniel 9:26. The destruction of Jerusalem was forecasted many years in advance

Dan 9:26. And after the sixty-two weeks anointed one (Messiah) shall be cut off, but not himself.

What do the words, “cut off” mean in the Old Testament?

Genesis 9:11. (God to Noah). Thus, I establish my covenant with you. Never again shall all flesh be cut off by the waters of the flood. (It means killed or destroyed).

Genesis 17:14. And the uncircumcised male child, who is not circumcised in the flesh of his foreskin, that person shall be cut off from his people. (Killed. Exodus 4:24-26).

Exodus 12:15. For whoever eats leavened bread from the first day until the seventh day, that person shall be cut off. (Killed).

Psalm 37:38. The future of the wicked shall be cut off. (Killed or destroyed).

Obadiah 1:9. Then your mighty men, O Teman shall be dismayed to the end that everyone from the mountains of Esau may be cut off by slaughter.

Cut off means killed or destroyed.

This gives us 483 days or 483 years in prophecy. 483 years added to 457 B.C. gives us A.D. 27. So after the year A.D. 27 the Messiah or anointed one, which is Jesus Christ would be cut off or killed. This prophecy met its fulfillment in the death and crucifixion of Jesus Christ in A.D. 30 outside the walls of Jerusalem. 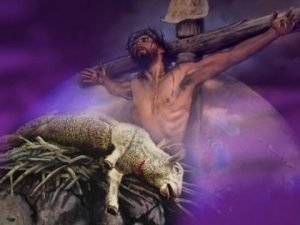 What does it mean “not for himself?”

Christ did not die for his own sake, but he died for others so they might have life eternal.

John 3:16. For God so loved the world that he gave his only begotten Son, that whoever believes in him should not perish but have everlasting life.

John 1:29. Behold! The Lamb of God who takes away the sin of the world. (Christ is the lamb, the sin offering, not for himself but for the sins of the world).

Ephesians 5:2. Christ also has loved us and given himself for us, an offering and a sacrifice to God for a sweet-smelling aroma.

Romans 14:8.9. If we die, we die to the Lord. For to this end Christ died and rose and lived again, that he might be Lord of both the dead and the living.

This sentence can refer to the personal pronoun “he” as Christ or the prince referring to Titus who destroyed Jerusalem in A.D. 70.

Let us find out what prince “Nagid” in the Hebrew means in the book of Daniel?

Dan 9:25. To restore and build Jerusalem until the Messiah the prince. (Refers to Christ).

What does “the prince to come” mean?

Hosea 6:3. Let us pursue the knowledge of the Lord. His going forth is established as the morning; he will come to us like the rain, like the latter and former rain to the earth.

Hosea 10:12. Sow for yourselves righteousness; reap in mercy; break up your fallow ground, for it is time to seek the Lord, till he comes and rains righteousness on you.

Joel 2:1. Alas for the day! For the day of the Lord is at hand; it shall come as destruction from the almighty.

Joel 2:1. Blow the trumpet in Zion and sound the alarm in my holy mountain! Let the inhabitants of the land tremble; for the day of the Lord is coming, for it is at hand.

Joel 2:31. The sun shall be turned into darkness, and the moon into blood, before the coming of the great and awesome day of the Lord.

Zachariah 9:9. Rejoice greatly, O daughter of Zion! Shout, O daughter of Jerusalem! Behold, your king is coming to you; he is just and having salvation, lowly and riding on a donkey, a colt, the foal of a donkey.

Zachariah 14:5. Thus the Lord my God will come! And all the saints with him.

Malachi 3:1. And the Lord, whom you seek, will suddenly come to his temple, even the messenger of the covenant, in whom you delight. Behold, he is coming says the Lord of hosts.

Malachi 3:2. But who may abide the day of his coming?

Malachi 4:5. Behold, I will send you Elijah the prophet, before the coming of the great and dreadful day of the Lord.

The prince who is to come, refers to Christ without a doubt. He is the anointed prince.

Dan 9:26. In the Hebrew it says: and the city and the sanctuary he will destroy, people of the prince the one coming and end of him.

“The city and the sanctuary” text is talking about Jerusalem. These were destroyed in A.D. 70 by the Roman military leader Titus.

Who actually destroyed the city and the sanctuary?

When looking back into the history of Jerusalem we find history repeats itself. In 586 B.C, Jerusalem and the sanctuary were destroyed by Nebuzaradan the captain of the guard to Nebuchadnezzar the king of Babylon. Jeremiah 52:12.14. However, although Nebuzaradan destroyed the city physically, the Jews had brought the calamity over themselves due to their sins and their refusal to repent of serving other gods. Jeremiah 25:1-11.

So the people of the prince would refer to both the Jews and the Roman military leader Tacitus, but primarily the Jews themselves were the cause of the downfall.

Dan 9:26. Its end shall come with a torrent, and to the end there shall be war. Desolations are decreed. (Direct Hebrew translation).

“When Titus began his siege of Jerusalem with 80,000 soldiers in April A.D. 70, the 3 leaders and their followers were engaged in bloody battles against one another. (Inside the city of Jerusalem). Fighting was bitter during the 5 months of the siege, while one section after another was captured, and starvation was rife. More than 100,000 Jews died in the city between early May and late June.”[1]