Daniel 11:34 Why did the papacy kill over 50 million Roman Catholics?

Daniel 11:34 a. and in to stumble of them they shall be helped help little and they are obligated on them many ones in slick dealings. (Hebrew direct translation)

Daniel 11:34 b. Now when they shall fall, they shall be aided with a little help: but many shall cleave to them with flatteries. (Hebrew/English translation)

Some countries helped the reformers and welcomed them to their lands e.g. England, Holland, Switzerland, etc.

(Walker 389[1]). (This is an account referring to the Huguenots of France.) By the Edict of Nimes in 1629, their religious privilege were preserved, but they suffered increasing attack from Jesuit and other Catholic influences as the century went on, till the revocation of the Edict of Nantes, by Louis XIV in 1685. They were reduced to a persecuted martyr church, to be proscribed until the eve of the French Revolution, and drove thousands of their number into exile, to lasting gain of England, Holland, Prussia and America.

The question arises, how can a Christian Church supposing to be the followers of Christ in the New Testament annihilate over 50 million Christians who believe in the Bible?

To find the answer one has to look at European history and see if similar things like this have happened before. For example, a teacher Ron Jones taught a high school class in Palo, Alto, California, USA, April, 1967. He was teaching about the Nazi rise to power and the annihilation of 10 million Jews in Germany during the Second World War. The question came from the students, how could it happen in the modern world we live in? The teacher did not answer outright, but later did an experiment with the class. He told them that he was going to form a club using discipline in the history class. Those wishing to volunteer may participate and those who refused were looked down upon as being unsociable. Only a few refused. Then he proceeded to tell the class that they should have a set of rules and a motto only used by the class. The teacher would be the leader and everyone will have a position of authority in the class to fulfill its obligations.

The class became like a military academy, where those who stepped out of line would be disciplined. Others should tell the teacher if others stepped out of place. The majority in the class enjoyed this club and a small minority did not because they could see the class’s democratic rights was being taken away. Their moral judgment were also taken away, because the teacher made all the decisions. It turned out that the teacher had partly brainwashed all who came to the club to do his bidding. Then he explained to them what he had done and showed them their hero on TV: Hitler speaking to the Germans in one of his campaigns. Some wished that they could carry on because they had a position of authority in life and carrying out orders. They were suddenly important people. It took time to de-brainwash these class students. The experiment was made into a film, which I saw in the USA. The film is called “The Wave” and can be found on you tube. The History teacher is Ron Jones on www.youtube.com. 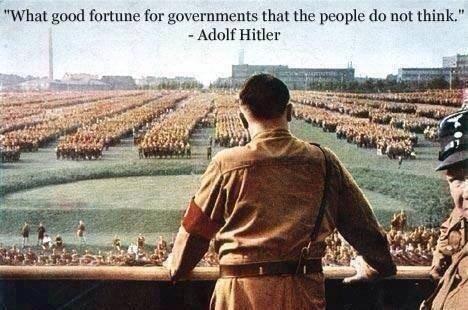 What this teacher did on a small scale can be replicated on a large scale like the Nazi influence over the German people during the Second World War. Hitler had brainwashed his own people to do his bidding. Hitler was a Roman Catholic and many of the Nazi leaders in the Reichstag were also Roman Catholics. Himmler who was in charge of the annihilation of 10 million Jews, was also a Roman Catholic and they had learnt from Roman Catholic history, about the Middle Ages and how the Papacy had brainwashed their own members to do their bidding in annihilating over 50 million Christians and dissenters. 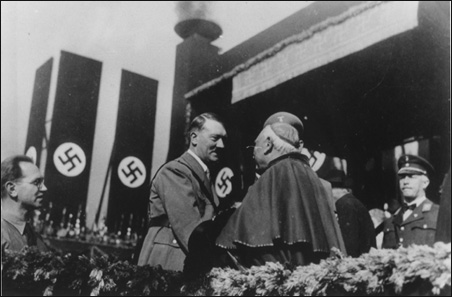 How could the Christian Church go so far into treating believers in their own ranks as enemies of the church during the Middle Ages? Christ says in the Bible that we should love our enemies.

Math 5:44 “But I say to you, love your enemies, bless those who curse you, do good to those who hate you, and pray for those who spitefully use you and persecute you”. However, in the Middle Ages the church killed their so called enemies. Why? The answer is simple: the church had fallen away from the teachings of Christ in the Bible.

For example, Christ taught one thing and the Church taught the opposite:

When a group of people have a set of teachings similar to those listed above, then they have all the similarities of a sect. A sect has a supreme leader or a committee who enforces their teachings on their followers by brainwashing them over a long period of time. When a person is brainwashed, they are willing to do virtually anything for the cause of the group, even if it means going against the normal teachings of society or the Bible.

Some of the largest groups of sects in our society today, are some of the largest church denominations in the world, who call themselves Christians, when they really are sects: the Mormons, the Jehovah Witnesses, the Moonies, Christian Science and the largest of them all is the Roman Catholic Church. So what is the difference between a sect and a Christian Church?

These groups blend their teachings with the Bible to serve their end purposes; however, they always have a supreme ruler, like a leader or a committee with authority. The results of such sects going to the extreme can be disastrous e.g. Jim Jones and his group committed suicide by cyanide poisoning: the Waco disaster led by David Koresh: Charles Manson etc.

Margaret Thaler Singer in her book “Cults in our Midst” gives the definition of a cult. “A cultic relationship is one in which a person intentionally induces others to become totally or nearly totally dependent on him or her for almost life decisions, and inculcates in these followers a belief that he or she has some special talent, gift or knowledge”[2].

Singer goes on to label three factors for defining a sect: 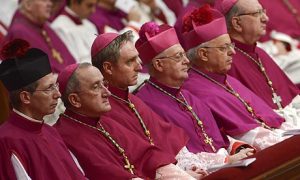 When we compare these factors with the papacy during the Middle Ages we find:

(Lyons 415). Children were given special attention. Before long the now familiar Jesuit saying was coined “Give me a child until he is seven, and he will remain Catholic the rest of his life.” This is because of the coordinated program of persuasion i.e. brainwashing with the Roman Catholic goals and beliefs.