Revelation 17:5 What does Babylon mean in the book of Revelation? 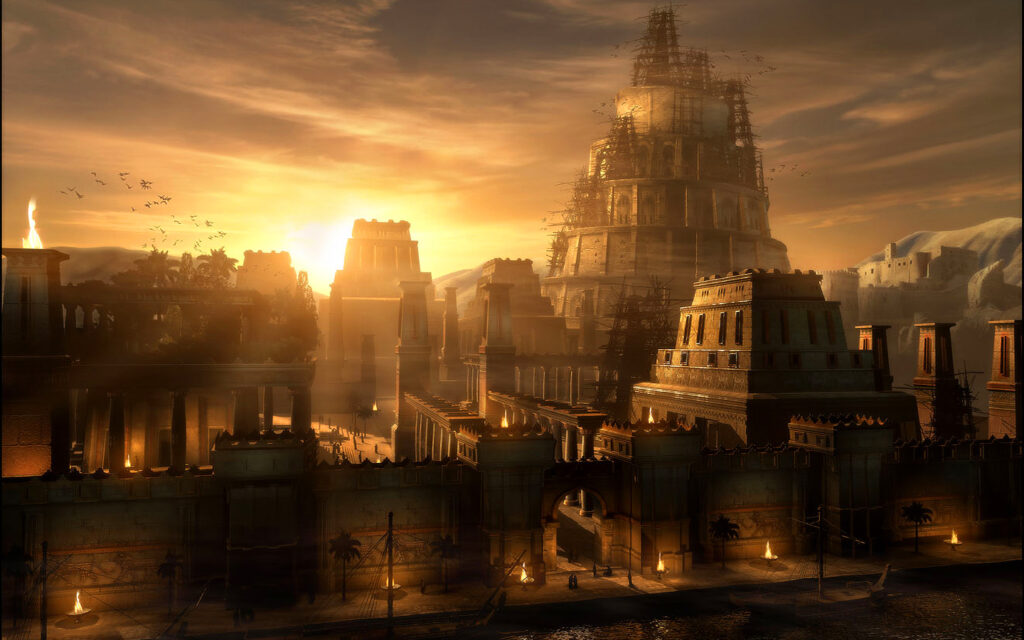 Rev 17:4.5. having in her hand a golden cup full of abominations and the filthiness of her fornication. And on her forehead a name was written: MYSTERY, BABYLON THE GREAT, THE MOTHER OF HARLOTS AND OF THE ABOMINATIONS OF THE EARTH.

What does it mean to have a mark or name on the forehead in Bible prophecy? 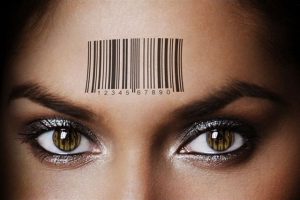 We will now do a word study from the Bible on what it means to have a mark or name on the forehead.

Ex 13:9. It shall be a sign to you on your hand and as a memorial between your eyes (forehead), that the Lord´s law may be in your mouth; for with a strong hand the Lord has brought you out of Egypt. Verse 14. So it shall be, when your son asks you in time to come saying, “What is this?” that you shall say to him, “By strength of the hand of the Lord brought us out of Egypt, out of the house of bondage. Verse 16. It shall be a sign on your hand and as frontlets between your eyes (forehead), for by strength of the Lord brought us out of Egypt. (Gods Ten Commandments and the exodus out of Egypt are related to the forehead).

Ezek 3:7-9. But the house of Israel will not listen to you, because they will not listen to me; for all the house of Israel are impudent and hard hearted. Behold I have made your face strong against their faces, and your forehead strong against their forehead. Like adamant stone, harder than flint, I have made your forehead; do not be afraid of them, nor be dismayed at their looks, though they are a rebellious house. (Context: Ezekiel’s forehead was made strong by God to condemn the Israelites of their sins. Hence, the forehead is related to spiritual strength)

Ezek 9:1-11. (The subject is those who are worshipping idols in Jerusalem, shall be slain). Verses 3-7. God said to an angel, “Go through the midst of the city, through the midst of Jerusalem, and put a mark on the foreheads of the men who sigh and cry over all the abominations that are alone within it.”  To the others he said in my hearing, “Go after him through the city and kill; do not let your eye spare, nor have any pity. Utterly slay old and young men, maidens and little children and women; but do not come near anyone on whom is the mark; and begin at my sanctuary.” So they began with the elders who were before the temple. They went out and killed in the city. Verse 11. The man clothed with linen who had the inkhorn at his side, reported back and said, “I have done as you commanded me.” (The context: A mark on the forehead means those who believe in God and his commandments who sigh and cry over abominations of Israel. Those who do not have God´s mark on their foreheads are those who do not believe in God and his commandments but worship idols, do iniquity, shed blood and indulge in perversity).

Deut 6:6-8. And these words which I command you to day shall be in your heart. (These words refer to the previous chapter Deut 5:6-22, which are the Ten Commandments). Verses 7-8. You shall teach them diligently to your children, and shall talk of them when you sit in your house, when you walk by the way, when you lie down, and when you rise up.  You shall bind them as a sign on your hand, and they shall be as frontlets between your eyes (foreheads). (The Ten Commandments are related to the forehead).

Rev 7:3. Do not harm the earth, the sea, or the trees till we have sealed the servants of our God on their foreheads. Verse 4. And I heard the number of those were sealed. One hundred and forty-four thousands of all the tribes of the children of Israel were sealed. Verse 9. After these things I looked and behold a great multitude, which no one could number, of all nations, tribes, peoples and tongues, standing before the throne and before the Lamb, clothed with white robes, with palm branches in their hands. Verse 13. Then one of the elders answered, saying to me, “Who are these arrayed in white robes and where did they come from?” Verse 14. And I said to him, “Sir, you know,” so he said to me, “These are the ones who come out of the great tribulation, and washed their robes and made them white in the blood of the Lamb. (The seal of God is related to the forehead).

The opposite to God´s mark on the forehead, for example the teachings from the woman/harlot who has a golden cup in her hand, full of abominations and the filthiness of her fornication. This is the absolute opposite to worshiping God, keeping his ten commandments and the faith of Jesus Christ etc.

What does Babylon mean in the New Testament? 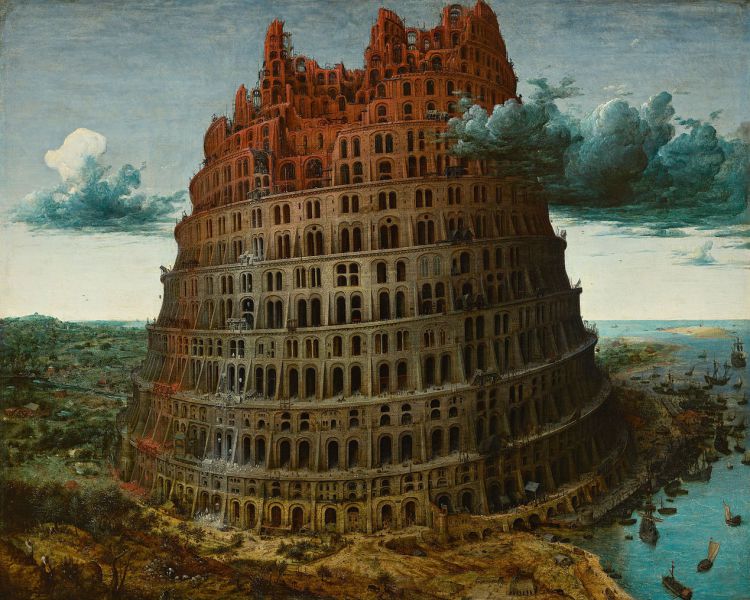 The word Babylon, in Hebrew and in the Greek means confusion. We first meet the word in Genesis 11: when the unbelieving offspring of Noah built a city and a tower reaching up to the heavens. God saw that nothing was virtually impossible for them to do, so he confused their language, so as to stop building the tower. Gen 11:9 Therefore its name is called Babel, because there the Lord confused the language of all the earth; and from there the Lord scattered them abroad over the face of all the earth.

Acts 7:43. You also took up the tabernacle of Moloch, and the star of your God Remphan, images which you made to worship; and I will carry you away beyond Babylon. (This text is referring to the house of Israel in verse 42. They were carried away into the Babylonian captivity).

1 Pet 5:13. She who is in Babylon, elect together with you. Greets you; and so does Mark my son. (Peter is sending greetings to the elect or church in Babylon. Babylon was a term used for the city of Rome to avoid political reprisals).

Rev 14:8. And another angel followed, saying, “Babylon is fallen, is fallen, that great city, because she has made all nations drink of the wine of the wrath of her fornication.” (This Babylon refers to Rev 16:19, Rev 17:5 and Rev 18:).

Rev 16:19. Now that great city was divided into three parts, and the cities of the nations fell. And great Babylon was remembered before God, to give her the cup of the wine of the fierceness of his wrath. (Babylon is related to all the people, which the plagues will fall upon in Rev 16: and this includes those who belong to the sea beast, the dragon and the false prophet in Rev 16:13).

Rev 17:5. And on her forehead a name was written: Mystery, Babylon the Great, the Mother of Harlots and of the Abominations of the Earth. (Babylon refers to the harlot, which represents the worldwide fallen church both Roman Catholic and Protestant, and the rest of the seven worldwide churches; it also incorporates the 10 horns representing the political nations, which support these churches).

Rev 17:2. The kings of the earth have committed fornication with the harlot Babylon.

Rev 17:2. The inhabitants of the earth were made drunk with the wine of Babylon’s teachings.

Rev 17:6. The harlot Babylon was drunk with the blood of the saints and martyrs of Jesus.

Rev 17:16. The ten horns representing the political nations of the world will hate the harlot Babylon and destroy her.

Rev 14:8. (The second angel’s message). Babylon is fallen, is fallen, that great city, because she has made all nations drink of the wine of the wrath of her fornication. (This city is the one referred to in Rev 16:19 under the seventh plague. This city includes all those who support the sea beast in Rev 13:1-10, the false prophet in Rev 13:11-18, and the dragon in Rev 12:9).

Rev 14:9.10. (The third angel’s message). If anyone worships the beast and his image and receives his mark on his forehead or on his hand, he himself shall also drink of the wine of the wrath of God – – – . He shall be tormented with fire and brimstone – – -.

Rev 14:12. (The people of God who are in opposition to Babylon) they are those who keep the commandments of God and the faith of Jesus.

Rev 18:2. Babylon the great is fallen, is fallen and has become a dwelling place of demons – – -. For all the nations have drunk of the wine of the wrath of her fornication, the kings of the earth have committed fornication with her and the merchants of the world have become rich through the abundance of her luxury.

Rev 18:4. Come out of her my people, lest you share in her sins, and lest you receive of her plagues. (Some of Gods people are still worshipping in the churches of Babylon and God is calling them to come out).

Rev 19:20. Then the beast was captured, and with him the false prophet who worked signs in his presence by which he deceived those who received the mark of the beast and those who worshipped his image. These two were cast alive into the lake of fire burning with brimstone. (Babylon includes the beast her in this text, which is the Roman Catholic Church system Rev 13:12.14. and the false prophet are the Protestants in the USA).

Rev 19:21. And the rest were killed with the sword which proceeded from the mouth of him who sat on the horse. (The rest who were in Babylon, were killed by the words of Christ from his mouth).

Conclusion of Babylon in the New Testament

Babylon means the following: city, captivity in Babylon, used as another word for the city of Rome in the first century. Babylon is related to a combination of spiritualism, the Roman Catholic Church system, Protestants in the USA, Satan, the worldwide fallen Christian churches. These will all unite in the future.

Babylon was drunk with the blood of the saints, which means there will come a time in the future where she will try to kill all the saints and true believers at the war of Armageddon. Babylon will receive the seven plagues and wrath of God. The people who are in Babylon do not keep the commandments of God or the faith of Jesus Christ. Babylon will become a place for demons. God is calling his people out of the Babylonian worldwide fallen churches. Babylon is referring to all those who have slain the prophets and saints through all ages.

Babylon church commandments of God political kingdoms of the world Rev 17:5 sign on the forehead sign on the hands